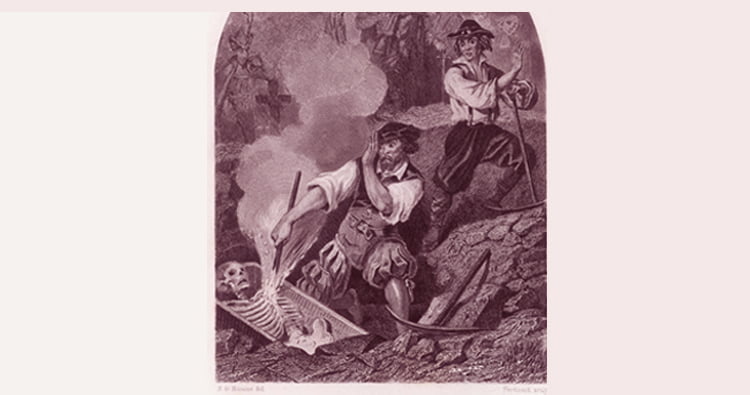 The original vampire folklore came from central & eastern Europe. It came to the attention of the west at the beginning of the 18th century, but the Austrian Empire had expanded in that era: this means the many sudden reports may be understood as bemused westerners observing and reporting upon a folk practice that was probably already well-established within its own locale.

The most frequently found ‘vampire’ traits are that: the main ‘vampire’ is a person who has died suddenly, or violently, or of a ‘draining’ disease; they are quite often, but not always, disliked in life; a series of epidemic deaths follows the death of the original ‘vampire’; when examined, the ‘vampire’ corpse isn’t found to be ‘suitably’ decomposed.

This Victorian illustration depicts the apotropaic staking of a corpse to keep the ‘vampire’ in his grave – depicting horror themes and telling stories was as fashionable and popular then as it is now! But given that these
remains have decomposed as far as the skeleton, this corpse would never have been identified as vampiric in the folklore’s native lands.