Since 2012, The Skeptic has had the pleasure of awarding the Ockham Awards – our annual awards celebrating the very best work from within the skeptical community. The awards were founded because we wanted to draw attention to those people who work hard to get a great message out. The Ockhams recognise the effort and time that have gone into the community’s favourite campaigns, activism, blogs, podcasts, and outstanding contributors to the skeptical cause. 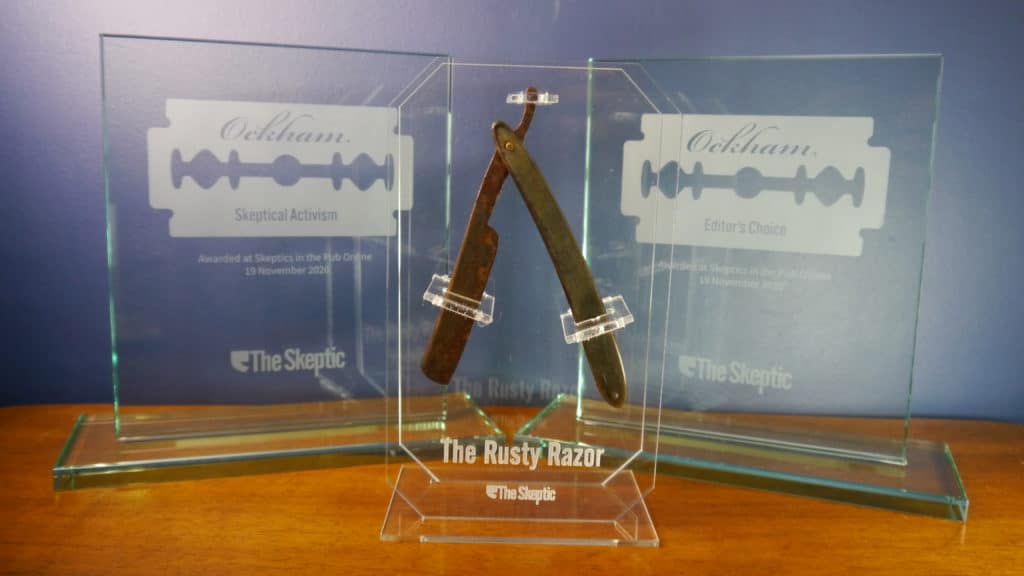 Last year’s Ockham winner was Dr Natália Pasternak, from the Instituto Questão de Ciência, for her excellent work combating Covid misinformation in Brazil. Natália, a regular contributor to The Skeptic since its relaunch, has been inspirational in reaching the public with clear, evidence-based information in response to health pseudoscience, including giving expert testimony to the Brazilian Senate.

Alongside Dr Pasternak, a special Editors’ Choice award was given to the Skeptics in the Pub Online team, celebrating the work that representatives from dozens of skeptical groups across the UK – and beyond – in producing regular, high-quality online skeptical talks and events throughout the pandemic.

Other past Ockham winners include Professor Edzard Ernst, the European Skeptics Podcast, Say WHY To Drugs podcast, Britt Hermes, the Edinburgh Skeptics’ annual Skeptics on the Fringe event, and more.

While we recognise the best in skepticism, our awards are also an opportunity to highlight the danger posed by promoters of pseudoscience with our Rusty Razor award. The Rusty Razor is designed to spotlight individuals or organisations who have been prominent promoters of unscientific ideas within the last year.

Last year’s Rusty Razor recipient proved a popular choice – the announcement that the award had gone to Dr Didier Raoult quickly became the most-read article on The Skeptic‘s site. Dr Raoult received the award for his continual promotion of hydroxychloroquine as a treatment for COVID-19, including publishing a study that was littered with fatal methodological flaws. Dr Raoult’s study, despite its small sample size and lack of proper controls, was hugely influential in the push to encourage COVID-19 patients to put their faith in the drug, leading to Jair Bolsonaro in Brazil and Donald Trump in the US publicly endorsing and recommending people turn to hydroxychloroquine.

The winners will be announced at Skeptics in the Pub Online on December 9th.

For an individual or organisation who has done outstanding work to promote critical thinking within the last 12 months.

When considering your nomination, we encourage you to think about:

For an individual or organisation who has been the most prominent promoter of unscientific ideas in the last 12 months.

When considering your nomination, we encourage you to think about:

Nominees and winners from previous years:

Birdfeeders are very popular, but are they what’s best for our feathered friends?

The erroneous assumptions of so-called alternative medicine: The test of time

The UK dumping raw sewage into rivers is nothing new – sadly, too many other countries do it