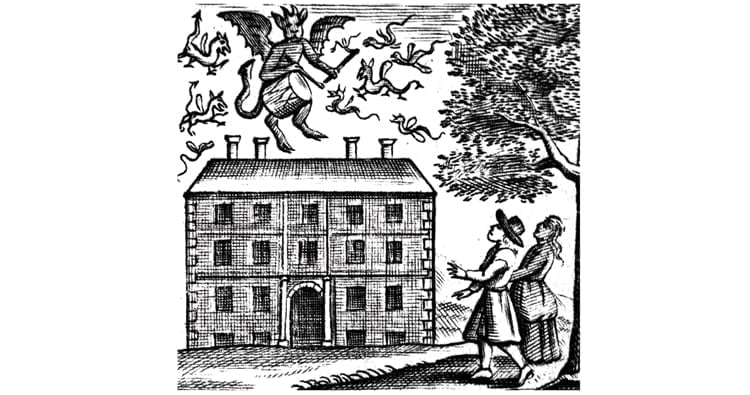 The tale of the ‘Tedworth Drummer’ is a classic poltergeist story. It tells of the mysterious disruption to the household of John Mompesson, a Wiltshire magistrate, between March 1662 and April 1663.
William Drury, an ex-regimental drummer whose vagrant living was supported by “hocus-pocus, feats of
activity and such like devices” was arrested, accused of using fraudulent documents to obtain money, and
presented to Mompesson; the magistrate let him go on his way, but confiscated his drum. There the trouble started,
and only became worse when the object itself was later destroyed.

The disturbances started with thumping and drumming while people were trying to sleep. It progressed onto
“plucking” clothes from the bed and throwing shoes. One household servant, a “stout fellow”, also attributed to the
drummer a supernatural attack which sounds to a modern mind like sleep paralysis: “he should find himself forcibly
held, as it were bound hand and foot”.

Drury the drummer seemed to be a serial offender; he took credit for the supernatural disturbances at Tedworth while detained yet again – this time for stealing. “I have plagued him” he reportedly confessed, “… and he shall never be quiet, ’til he hath made me satisfaction for taking away my drum”.
The story of the Tedworth Drummer comes down the centuries courtesy of the posthumously published
Saducismus Triumphatus (1681) of clergyman Joseph Glanvill (1636-1680). Subtitled Full and plain evidence
concerning witches and apparitions. In two parts. The first treating of their possibility. The second of their real
existence, it gave 26 ‘relations’ of supernatural events.

Glanvill wrote: “… those that dare not bluntly say there is no God, content themselves … to deny there are
spirits or witches” – so lack of belief in spirits was a slippery slope leading to atheism which Glanvill believed
to be attended by many social evils.

In his favour, Glanvill broadly championed religious tolerance and freedom of thought (his era was blightedby post-Reformation tension between Catholics and Protestants). He was an early philosopher of science and
thought the supernatural amenable to study by this method. This has led to him being regarded by some as
the father of modern psychical research.

However, Glanvill was methodologically lax by modern standards, drawing far too firm conclusions from
second-hand accounts, and he could even be regarded as gullible.