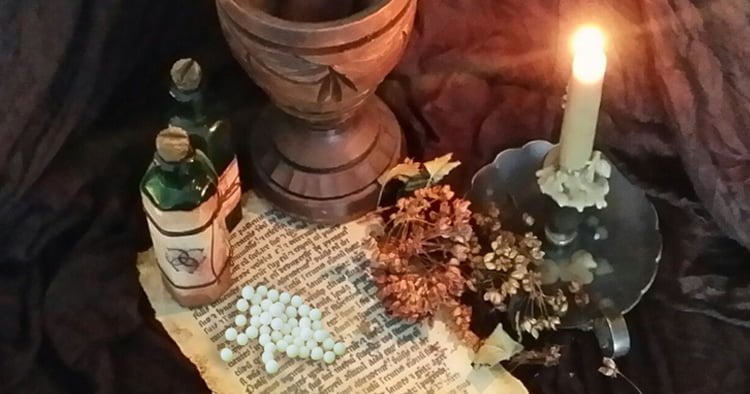 “Homeopathy is witchcraft” said Dr Tom Dolphin, deputy chairman of the BMA’s junior doctors committee at their annual conference in May. It seems the rest of the delegates agreed, since they passed a motion denouncing the use of alternative therapies where there was no evidence for their effectiveness.

I’m no expert on medicine or homeopathy. Witchcraft on the other hand …

Is the good doctor right? Or is he recklessly impugning homeopaths? Or witches?

WHAT’S A WITCH THEN?

Let’s start with a definition of witchcraft. In ordinary English dictionaries, the terms ‘witchcraft’ and ‘sorcery’ are broadly synonymous. But in anthropological writings, there is a subtle difference: this has arisen for the historical reason that the classic work on ethnological witchcraft was done on the Azande people of north central Africa (mostly modern Congo & Sudan) by Edward Evans Pritchard.

The Azande regard witchcraft and sorcery as slightly different (as do many other non-European peoples), so the distinction was and is useful, which is why it has lasted.

Both sorcery and witchcraft involve the manipulation of supernatural forces to produce magic. Sorcery is the production of magic using self-conscious ‘formulae’ – rituals and activities. Anyone with the ritual knowledge can perform sorcery. Being a witch involves qualities more intrinsic to the person: somebody can be born a witch, and even cast their evil inadvertently (such as with the evil eye).

Broadly, you are a sorcerer by your deeds and a witch by your nature.

So sorcery is the appliance of science to the supernatural: the consistent application of objects, words and rituals to produce consistent results. In fact, ideally:

“A spell need never go wrong, unless some detail of ritual observance had been omitted or a rival magician had been practicing stronger counter-magic”

“a prayer … (is) a form of supplication: a spell (is) a mechanical means of manipulation”

Sorcery assumes the existence of a more subtle world than we can perceive with our natural facilities, that this subtle world has influence over us and that we can transact with it. That’s not necessarily so weird. I believe in electricity even though I can’t see electrons.

Many complimentary therapies also have unproven concepts such as meridians, or chi. But that doesn’t really matter: the map is not the territory. At school, they told you that atoms were like little coloured snooker balls whizzing around other snooker balls – that isn’t quite true either.

But the difference between acupuncture meridians and ‘snooker ball’ atoms is that one is a good scientific model, and the other is a person with lines drawn on their body.

Strictly speaking, sodium atoms don’t have extra red snooker balls in their outer shells, nor chlorine atoms lack blue snooker balls in their outer shell. I’m assured by better qualified people than I that it’s all a bit more complicated than that. However it’s a bloody good model, because we know what happens every time sodium and chlorine get together.

So for magic and homeopathy to be scientific, we don’t necessarily have to have yet validated their theoretical postulates. Many things remain yet to be discovered, after all. We would simply have to be convinced that their models produce consistent and predictable results.

Let’s stick to homeopathy. The answer may be ‘yes’.

Homeopathy appears, in some, to offer the same kind of results that placebos do. In other words, results not beyond what can be achieved with utterly neutral substances.

Placebos are a fascinating phenomenon. They appear to invoke some kind of natural health assistance via a belief mechanism. Modern studies demonstrate that he placebo effect certainly works in some people and we even seem to have subconscious preferences about the relationship between effectiveness and potency: the colour of pills matters, as does the dosage (two pills are better than one) and whether or not the pill is branded.

The effects of the placebo’s malevolent sibling, the nocebo have also been noted as powerful from time to time, when a human target of a powerful curse obediently gives up the ghost and surrenders to their maliciously prescribed fate.

Nicholas Humphrey’s postulated ‘health management system’ proposes that natural defensive bodily functions such as vomiting or fevers are marshalled at an appropriate time to combat illness in a ‘top-down’ (from the cognitive to the subconscious/physical parts of the brain) mechanism. The triggers for the engagement of these powerful tools are, in this model, a compelling experience, such as a shamanic/religious ritual (or administration of a medicine by an authority figure such a qualified practitioner in whom you have trust).

Studies on the modern counterparts of shamanic rituals – faith-healing – have found that while the participants have subjectively felt and improvement in their conditions, that they have objectively not improved1. Furthermore, psychometric tests suggest that the participants who benefited from these rituals ‘engaged in denial and disregard of reality’2.

The use of empirical techniques, such as randomised controlled trials (RCTs), demonstrate that prescription drugs work more than placebos. They affect something more than our natural, and distressingly moderate, ability to rally our own defences.

As fascinating as the placebo effect is, it doesn’t work on enough people or consistently enough to count as being as potent as medicine.

I started with a cussedly detailed differentiation between witchcraft and sorcery because I assumed that you, dear reader, are interested in such fine distinctions. You have, after all, visited the blog of a woman depicted on a broomstick.

But I think it has a further application in some complementary and alternative therapies.

I would say that ‘spiritual healing’ and ‘psychic healing’ bear more relation to ‘witchcraft’, in the anthropological sense. They employ the ‘intrinsic’ model of a naturally gifted practitioner.

Practices such as homeopathy and reflexology bear more relation to ‘sorcery’, in the anthropological sense. They provide for recipes or rituals, consistent with established models imparted during standardised courses of study.

But in the European sense and in day-to-day English, ‘witchcraft’ and ‘sorcery’ can pass for the same thing.

Thank you to Tessera2009 for nagging me to write this. I’ve been a bit behind for a month or so, and wouldn’t have done it without the gentle nudge.