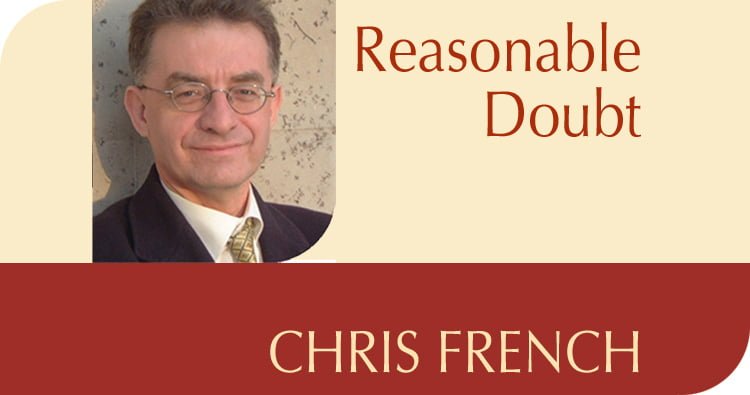 IN PART 1 OF THIS ARTICLE, I presented several examples of contexts where our inherent “effort after meaning” can lead us to see meaningful patterns where none really exist. Another context where this applies is the psychotherapeutic context. Clients often feel that there is great and profound insight in the questions and statements of their therapist and will often try hard to fathom the true significance of what is said.
Consider the following interaction between a woman and her therapist:

Men are all alike.
In what way?
They’re always bugging us about something or other.
Can you think of a specific example?
Well, my boyfriend made me come here.
Your boyfriend made you come here?
He says I’m depressed much of the time.
I am sorry to hear that you are depressed.
It’s true. I am unhappy.
Do you think coming here will help you not to be
unhappy?
I need some help, that much seems certain.
What would it mean to you if you got some help?
Perhaps I could learn to get along with my mother.
Tell me more about your family.
My mother takes care of me.
Who else in your family takes care of you?
My father.
Your father?
You are like my father in some ways.
What resemblance do you see?
You are not very aggressive, but I think you don’t want me to notice that.
What makes you think I am not very aggressive?
You don’t argue with me.
Why do you think I don’t argue with you.
You are afraid of me.
Does it please you to believe I am afraid of you?
My father is afraid of everybody.
What else comes to mind when you think of your father?
Bullies.
Does that have anything to do with the fact that your
boyfriend made you come here?

We can see from this extract the way that the therapist is skilfully guiding the conversation to allow the client to gain insight into her relationships with others. Except for one thing – the “therapist” here is a fairly primitive computer programme called “Doctor” with no real understanding of semantics whatsoever. It was written by Joseph Weizenbaum of MIT back in the 1970s and works simply by seeking out key words and doing some simple syntactic transformations (Weizenbaum, 1976). For example, if the programme sees “Do you X?”, it replies, “What makes you think I X?” If it cannot recognise a sentence frame, it might come out with “Please go on” or refer back to something from earlier in the conversation – as with its “insightful” linking of “bullies” and “boyfriend”. As with a client interacting with a psychic, the meaning and significance is read in by the client not actually present in the utterances – but many clients simply refused to believe that “Doctor” was nothing more than a clever bit of programming.

A similar point was made in a study carried out by sociologist Harold Garfinkel (1967) half a century ago. He told his participants that the Department of Psychiatry was investigating new approaches to “giving persons advice about their personal problems”. Each participant provided background details of some serious issue about which they would like some advice. They were then given the opportunity to put questions about this issue to a counsellor in the next room, the only restriction being that all questions must be answerable with ‘yes/’no’ responses. After a suitable pause following the submission of each question, back would come a ‘yes’ or ‘no’ response. Most participants were satisfied that the counsellor fully understood their problem and was giving good advice upon how to deal with it. In fact, there was no counsellor in the other room – only an experimenter feeding back ‘yes’ or ‘no’ responses on an entirely random basis.

The overall lesson to be drawn from such considerations for counsellors and therapists would appear to be that it is safer to accept current symptoms at face value and to treat them accordingly. If someone has a fear of horses, use techniques that help them to directly overcome that fear rather than assume that the fear of horses is a symbolic representation of some hidden, underlying fear. It is all too easy to join the dots and see exactly what one expected to see.

In this and the preceding column, I have only dealt with one side of the story – our bias towards seeing meaning when it isn’t really there. There are, of course, real dangers associated with missing meaning and significance when it really is there – and we should not forget that our motivation towards seeking meaning and making connections drives all scientific and artistic creativity.

In the words of Carl Sagan, “What is called for is an exquisite balance between two conflicting needs: the most sceptical scrutiny of all hypotheses that are served up to us and at the same time a great openness to new ideas. If you are only sceptical, then no new ideas make it through to you. On the other hand, if you are open to the point of gullibility and have not an ounce of sceptical sense in you, then you cannot distinguish useful ideas from the worthless ones.”

Professor Chris French, a former Editor in Chief of The Skeptic, is Head of the Anomalistic Psychology Research Unit at Goldsmiths, University of London (www.goldsmiths.ac.uk/apru). His previous books include Why Statues Weep: The Best of The Skeptic (with Wendy Grossman) and Anomalistic Psychology (with Nicola Holt, Christine Simmonds-Moore and David Luke). His most recent book (with Anna Stone) is Anomalistic Psychology: Exploring Paranormal Belief and Experience. He also writes for the Guardian (http://www.guardian.co.uk/profile/chris-french). Follow him on Twitter: @chriscfrench