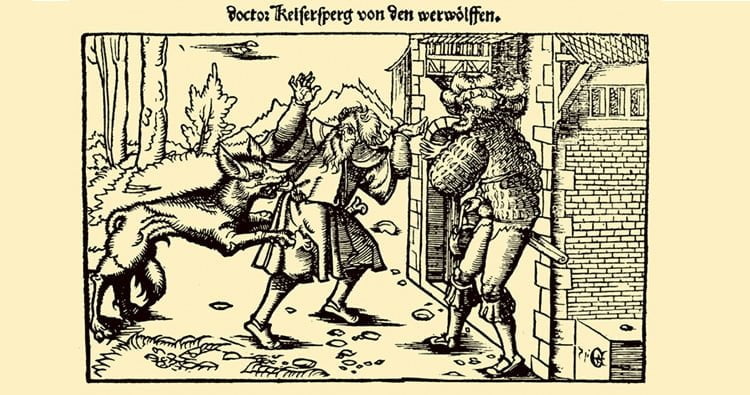 Johann Geiler von Kaisersberg (1445-1510), the ‘Doctor Keisersperg’ of the caption above, was a Swiss preacher who gave a series of Lenten sermons in 1508 which were transcribed and published as Die Emeis (The Ant Colony). The 1516 edition of this collection benefited from the addition of woodcuts attributed to Hans Baldung Grien, including this one, of a werewolf attacking a man.

The fifteenth and sixteenth centuries saw a peaking of interest in werewolfism in some parts of mainland Europe. Authorities such as Jean Bodin and Henri Boguet teased out the details and logic of the witches’ pact, and whether the devil actually had power to really change men into beasts. Charges of werewolfism at this time, therefore, were associated with witchcraft and heresy.

But this was the era of the Reformation and Counter-Reformation, with its attendant paranoia, scapegoating and bloodshed. ‘Werewolves’ tended to be found in more isolated, mountainous areas, where there were likely to be both religious independents and real wolves.

Of the several werewolf trial records that remain today, we can discern a motley parade of political scapegoats, unpopular villagers, torture victims and real psychopaths.