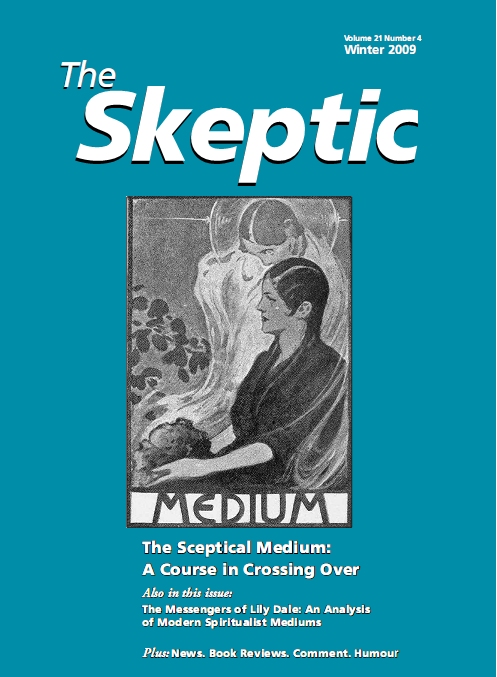 The Sceptical Medium: A course in Crossing Over
Jon Donnis recounts his experience at a meduimship training school

The messengers of Lily Dale: An analysis of modern spiritualist meduims
Benjamin Radford recounts his experience at a mediumship retreat in the USA

Sprite, by Donald Rooum, the ongoing saga of an ethereal being who has the misfortune to fall for a confirmed skeptic.
Cartoons by Tim Pearce
Pictures from Hilary Evans’ Paranormal Picture Gallery

Occult London; by Merlin Coverley
2012: The year of the Mayan prophecy; by Daniel Pinchbeck
The Paperback Apocalypse: how the Christian Church was left behind; by Robert M Price
Counter-Knowledge: How we surrendered to conspiracy theories, quack medicine, bogus science and fake history; by Damian Thompson
Jinn from Hyperspace: And other scribblings – both serious and whimsical; by Martin Gardiner
Beyond the Hoax: Science, philosophy and culture; by Alan Sokal

Through a Glass Darkly
Michael Heap

Letters from our readers
An Author’s Response; Nick Harding
The Definition of a Sceptic; Ian Mason
Whose Father is the Father; Rory Allen