Sheldrake and Randi: When Pigs and Accusations Fly

The most recent issue of The Skeptic (UK) featured an interview by Chris French with James Randi (you can read the interview here).  It covered an array of topics spanning Randi’s childhood in Canada, to Peter Popoff, to one very famous million dollar challenge.  However, one subject that did not come up was a certain 2007 award given out by the James Randi Educational Foundation “to the scientist who said or did the silliest thing related to the supernatural, paranormal or occult”. 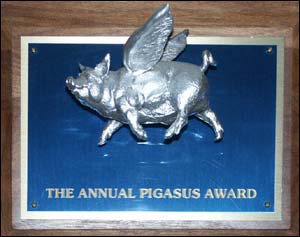 The accolade is called the ‘Pigasus Award’ and in 2007 one of its recipients was Rupert Sheldrake for his work on telephone telepathy through morphic resonance.

After the interview was published, Rupert wrote a letter to The Skeptic asking why Chris French did not challenge Randi on Rupert’s Pigasus Award, when, in fact, Chris has and is working on research with Rupert on this very phenomena.  Rupert’s letter also contained criticism levelled at Randi for a document that was used in a TAM3 workshop, which stated that becoming an expert media sceptic was as easy as “tell[ing] people you’re an expert. After you do that, all you have to do is maintain appearances and not give them a reason to believe you’re not.”

In the spirit of fostering open debate and discourse, we’ve given Randi the opportunity to reply to Rupert’s letter.  Chris French has also written a reply to the original letter.  All three letters can be viewed here.

Can you recognise antisemitism when you see it? An interactive meme adventure

How the conspiracy theorists behind the failed US coup settled on a new date: March 4th

Activated charcoal is increasingly popular, so let’s talk about what makes for a good toothpaste

Familiarity and caution may have killed off the story of the phantom hitchhiker, but our draw towards creepy tales will always find an outlet.
Read more